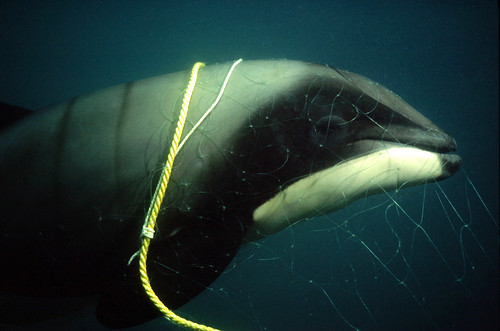 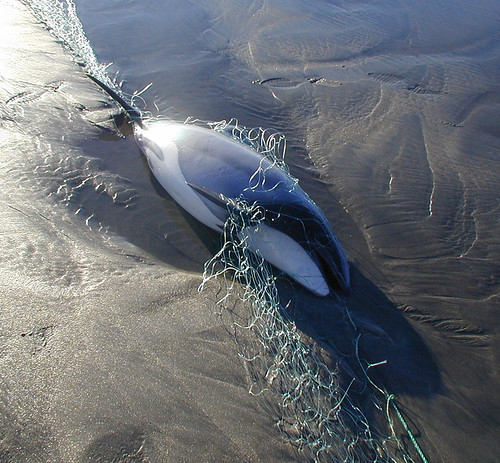 Cetacean experts and advocates are warning that the Maui’s dolphin could go extinct within 15 years.

The future of the Maui’s dolphin will be part of the discussions by 200 of the world’s cetacean scientists who are in San Diego for the annual two-week-long meeting of the Scientific Committee of the International Whaling Commission, IWC.

She and other dolphin experts and advocates are warning that unless the level of fisheries protection is increased immediately, Maui’s dolphins could become extinct in 15 years.

Maui’s dolphins are a subspecies of Hector’s dolphins and occur only in shallow coastal waters off the west coast of New Zealand’s North Island.

Hector’s and Maui’s dolphins are among the smallest dolphins in the world, small enough to fit in a bathtub. They are the only dolphin species with a rounded dorsal fin, and are also distinguished from other dolphins by their behavior and limited distribution.

Hector’s and Maui’s dolphins prefer to live in waters less the 100 meters deep, which makes them vulnerable to human activities such as fishing with gill nets, resource exploitation, and oil spills. 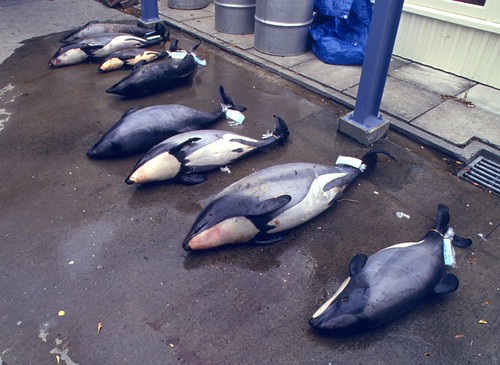 Thomas Tennhardt, president of NABU International Nature Conservation Foundation, says, “New Zealand has so far shirked its responsibility to protect the last Maui’s dolphins. For three years running, IWC scientists have urged the New Zealand government to ban the use of gillnets and trawling across their entire habitat. But New Zealand has stubbornly ignored the scientists and is selling out this rare species for short sighted economic reasons.”

In order to save Maui’s from extinction, the New Zealand nonprofit Royal Forest & Bird Society is recommending full protection from all threats: fishing, marine mining and seismic surveying in the areas that they inhabit.

Threats to the Maui’s survival are constant. An oil spill caused by the Austrian oil company OMV off the West coast of New Zealand’s North Island on February 20 threatened the few remaining Maui’s. Some 300 liters of crude oil were released about 30 km from the waters inhabited by the Maui’s dolphins. According to OMV, the spill spread to cover 10 km of ocean waters before it was cleaned up.

“It is the third oil spill caused by OMV in this area already in just five years,” said Thomas Taha, who chairs the NABU International Nature Conservation Foundation. “We therefore call on the government of New Zealand to prohibit oil production in sensitive marine waters.”

Because protection from gillnets extends over less than 20 percent of Maui’s dolphin habitat and less than five percent for trawling, dolphins continue to die in fishing nets as bycatch.

Industry bodies, such as the New Zealand Seafood Industry Council, have opposed every effort to improve the protection for these animals. They have taken the government to court on several occasions in an attempt to overturn more protective regulations.

Despite overwhelming evidence, New Zealand’s fishing industry still holds that, “…no immediate crisis exists for either Maui’s or Hector’s dolphins.”

An upsurge of seismic surveys and fossil fuel extraction in and near the Maui’s dolphins’ home waters further increase the risks for this small and declining population.

But if these beleaguered dolphins could be protected from humans they could still recover and thrive, says NABU. The absence of deaths caused by human activities “would set Maui’s dolphins back on the road to recovery and allow numbers to grow to 500 individuals in 87 years,” the group said in a statement.

But reproduction is slow for Maui’s dolphins. Females don’t breed until they are at least seven years old and only give birth to a single calf every two to four years.

With a life span of up to 20 years, mothers can only raise a small number of calves.

Maximum population growth for this species is just two percent. This means that a population of less than 50 can increase by fewer than one dolphin a year.