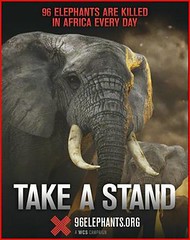 Poachers kill an estimated 96 elephants every day in Africa for their ivory tusks, but now Africa’s elephants have attracted a powerful new supporter – the Piano Man, singer and songwriter Billy Joel.

As computer-animated elephants come to life from shards of ivory, Joel’s voiceover warns, “We can’t turn back time, but we can reverse this trend. Don’t be the generation that allowed elephants to go extinct.”

There will be no ivory piano keys for this six-time Grammy Award winner, who has scored 33 Top 40 hits in the United States, all his own songs. Since his first hit, “Piano Man” in 1973, Joel has sold more than 150 million records worldwide, making him one of the best-selling musicians in history.

Last year, Joel published a impassioned letter on his website in defense of elephants, saying, “I am a piano player. And I realize that ivory piano keys are preferred by some pianists – but a preference for ivory keys does not justify the slaughter of 96 elephants every day. There are other materials which can be substituted for piano keys. But magnificent creatures like these can never be replaced.”

“Music must never be used as an excuse to destroy an endangered species,” wrote Joel. “Music should be a celebration of life – not an instrument of death.”

Since 2004 African elephants, Loxodonta africana, have been classed as Vulnerable to extinction by the International Union for the Conservation of Nature on its IUCN Red List of Threatened Species. Elephants were previously classed as Endangered in 1996.

In September 2013, the Wildlife Conservation Society, WCS, launched its 96 Elephants campaign to amplify and support the Clinton Global Initiative “Partnership to Save Africa’s Elephants” by stopping the killing, stopping the trafficking, and stopping the demand.

Based at New York’s Bronx Zoo, WCS manages all four of the city’s zoos and the New York Aquarium. Founded in 1895 as the New York Zoological Society, WCS now works to conserve more than two million square miles of wild places around the world.

The “Take a Stand for Elephants,” campaign was conceived and developed for 96 Elephants by pro bono partner, Steve Harper, an independent creative director, designer and animator based in New York and founder of ThisisBonaFide.com.

The campaign will appear across television, radio, print, digital, and out-of-home channels and media, activated by Horizon Media, working on behalf of 96 Elephants.

Said John Calvelli, WCS executive vice president of public affairs and director of the 96 Elephants campaign, “Through his timeless music, Billy Joel has become a cultural icon and has spoken out for many important causes. Now, Billy Joel has taken a stand for elephants, and for that we are extremely grateful.”

Working with 195 partners including 125 zoos across 45 states, the 96 Elephants campaign has helped to ban ivory sales in New York and New Jersey and is currently supporting proposed bans in California – the largest ivory market after New York – and across the United States.